Lovely sunshine but a bit of a wind today – had a 16km walk around St Mary’s. 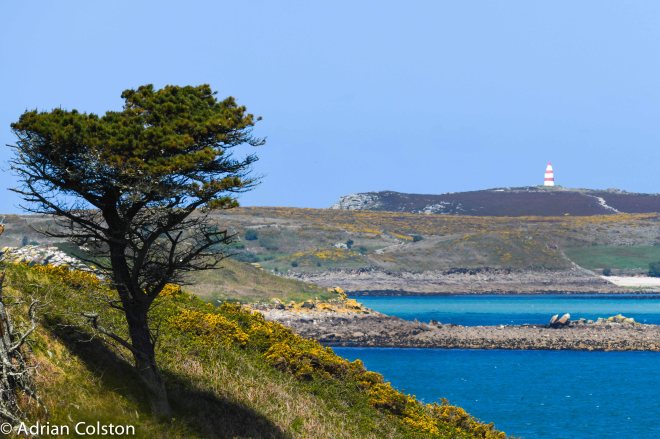 Watermill Cove in the sunshine

The uninhabited island of Sampson

Out to the Eastern Isles

How about that for a view from the green 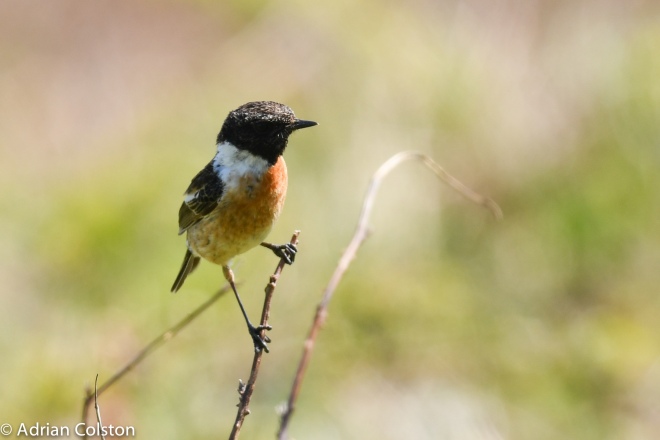 A rather nice stonechat

And an obliging linnet

Spent the day yesterday wandering around St Mary’s, lovely sunny day and lots of swallows and martins migrating through the Islands. 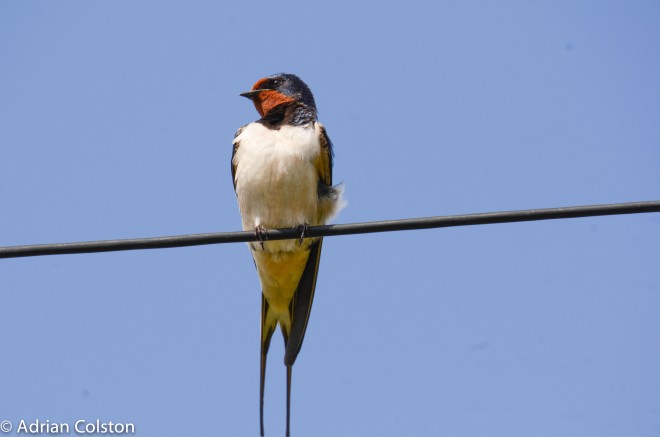 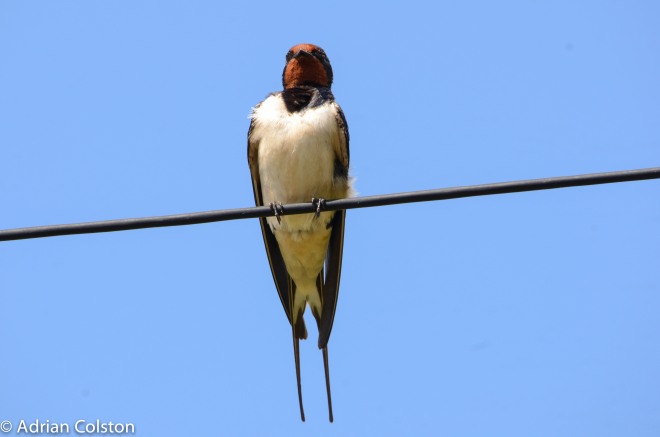 A swallow on the wire in Old Town 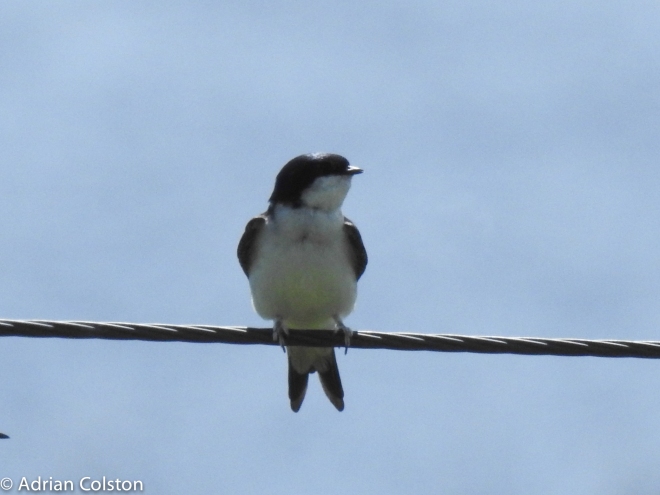 House martin at Kitty Down 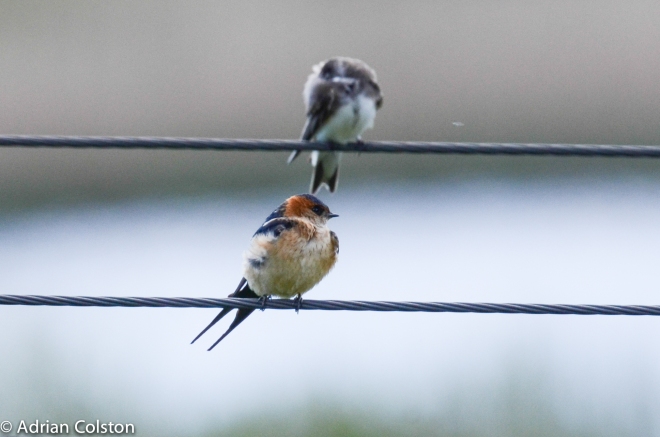 And in amongst a flock of a 100 plus swallows, house martins and sand martins was this red-rumped swallow – a spring overshoot from southern Europe. Also saw my first swift of the year today.

Looking from Kitty Down back to High Moors and Porthellick

And then this at at Higher Moors ….. the Wildlife Trust have coppiced all the willows next to the hide and as a result there is absolutely no cover when approaching the hide, so no birds at all at the southern end of the pool. Surely this could have been planned and executed differently? It will now take several years before the cover regrows and hide becomes usable again. I really hope next autumn doesn’t see the same treatment up to the next hide……

Which hosted this 1st winter Iceland Gull – note the bird is all white and has no black tips to the wing. A rare visitor to the UK, but this year has seen quite and influx.

From Porthloo back to the harbour at Hugh Town 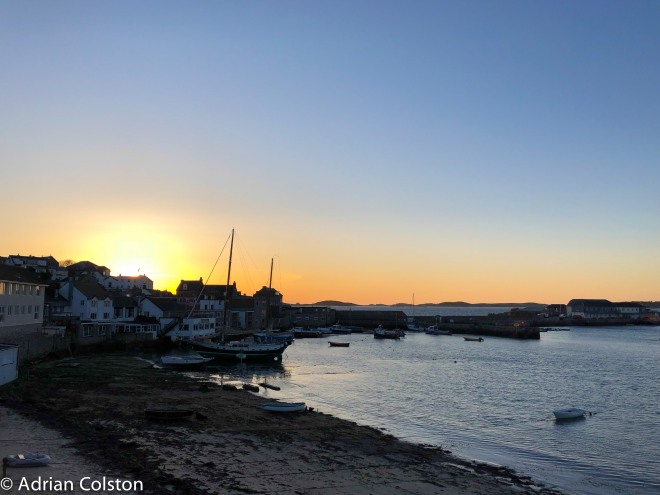 The sun setting over the Atlantic (pub and ocean)

Every now and again something extraordinary happens.

We were out birding yesterday on St Mary’s on the Isles of Scilly prior to me catching the Scillonian back to the mainland. We were in Carreg Dhu, an ornamental garden in the middle of the island when a big flock of …. hawfinches flew into the sycamore tree directly above our heads. It was difficult counting them as the foliage obscured them and they came in two groups separated by around 30 seconds. We made an estimate of 24 + birds. 24 +!!

A little later the flock was spotted again by other birders and it was estimated that there were between 50-60 birds in it. By all accounts there were also some flocks of hawfinches on the mainland too.

I doubt very much whether I will every see such a thing again. The UK is currently experiencing some big southerlies so the most likely explanation is that these flocks have come from the Continent.

Here is a photo of a couple of the birds from wildlife photographer, Richard Stonier’s twitter account. You can checkout his gallery of hawfinch photos here. 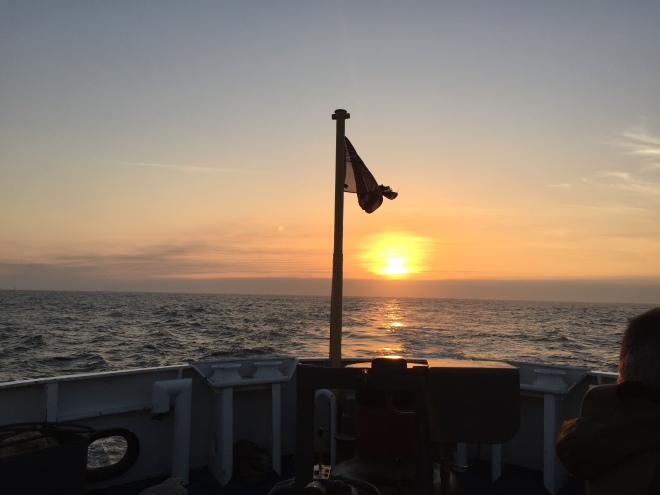 Even got a great sunset over the Isles of Scilly on the way back to Penzance.

In so many different ways, Scilly never disappoints

Had a cream tea at Juliet’s Garden yesterday and off course got mobbed by the local sparrow population.

Queuing up to eat my scone! 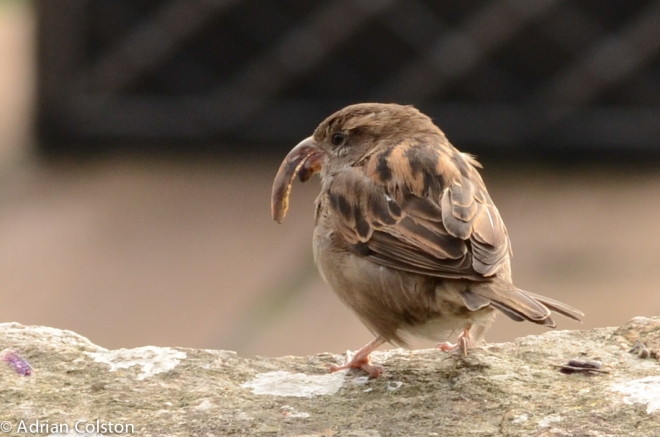 And rather strangely there was this individual with a very distorted upper bill – I suspect that if it didn’t live at Juliet’s Garden it might not have got this far….

We encountered this wintering Great Northern Diver yesterday on the way back from our pelagic trip.

Around 2500 birds winter in southern Britain each year

A few pairs breed in Scotland

The majority breed by large deep lakes in the Tundra in Iceland, Greenland and North America/Canada

On St Mary’s yesterday we managed to see the American Golden Plover on the beach at Porth Hellick.

I managed to see the American Golden Plover on St Mary’s on the Isles of Scilly on Monday 18th September. Here are a couple of photos of it on the beach at North Hellick. 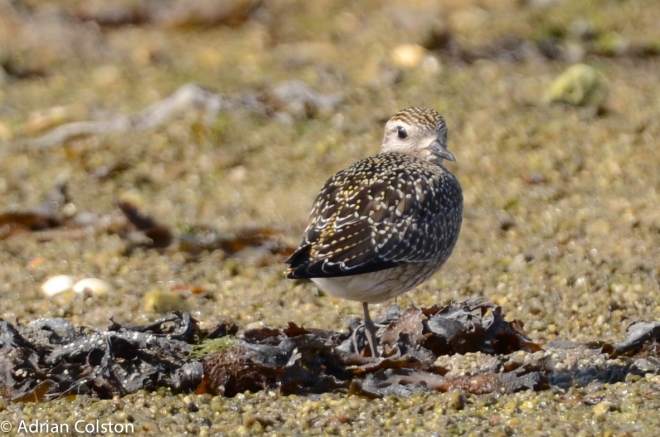