Not only are there rhinos in Exeter (see here) and in Torbay – there is also one at Paddington Station.

There is still time to see the rhinos in Exeter and Torbay (see here for details) – all part of a project to promote their conservation. The rhinos will be out and about until the 9th October.

I spent much of Thursday walking around Exeter looking out for the Rhinos! It is a modern art project highlighting the plight of rhinos in the wild run by Wild in Art, Torbay Council, Exeter City Council and Paignton Zoo and sponsored by Stagecoach South West. It follows on from a similar project about gorillas held in 2013 – see here. For more details about the Great Big Rhino Trail see here. The project is being hosted in Exeter and Torbay – in total there are 40 full size rhinos and 53 baby ones. Here is a selection of photos of the ones we found in Exeter.

Not everyone likes being under siege

Glimpses in the Guildhall Shopping Centre 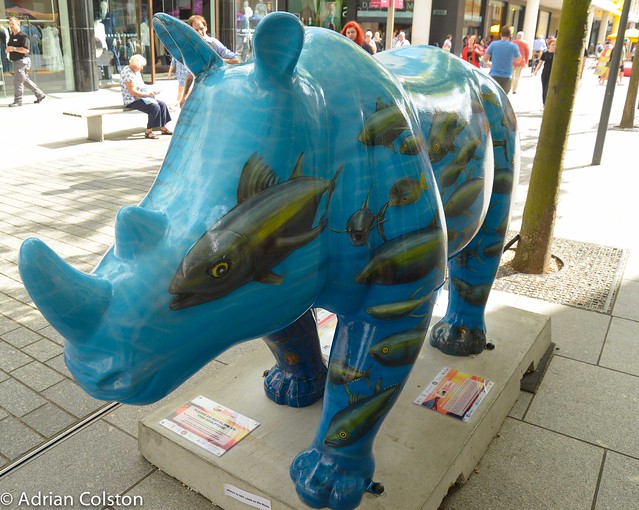 Finally a Flickr album of all my rhino pictures

The project runs in Exeter and Torbay until the 9th October.

My diary tells me that I have put aside the 1st September to track down the Exeter Rhinos! This is a conservation project run by Paignton Zoo and supported by Wild in Art, Exeter City Council and Torbay Council to help protect the rapidly dwindling rhino populations in Africa and Asia.  In essence there are over 50 colourfully decorated life size adult and baby rhinos dotted around Exeter and Torbay. It follows on the heels on the 2013 project to highlight the plight of gorillas which I blogged about here.

This one is called Target – RAF roundels, which look like targets and of course rhinos are targets for poachers.

As this pull out for the Express and Echo states the Torbay and Exeter rhinos will be around until the 9th October – get out and explore you respective Cities and find the rhinos – support conservation and raise awareness. The artwork is of a high standard and it is good way to enjoy the summer.