I have been very surprised how much Heather Beetle damage there is on Dartmoor this year. The Heather Beetle larvae hatch in June and then feed on the young leaves and shoots. As a result the affected parts of the heather plant turn orange brown. 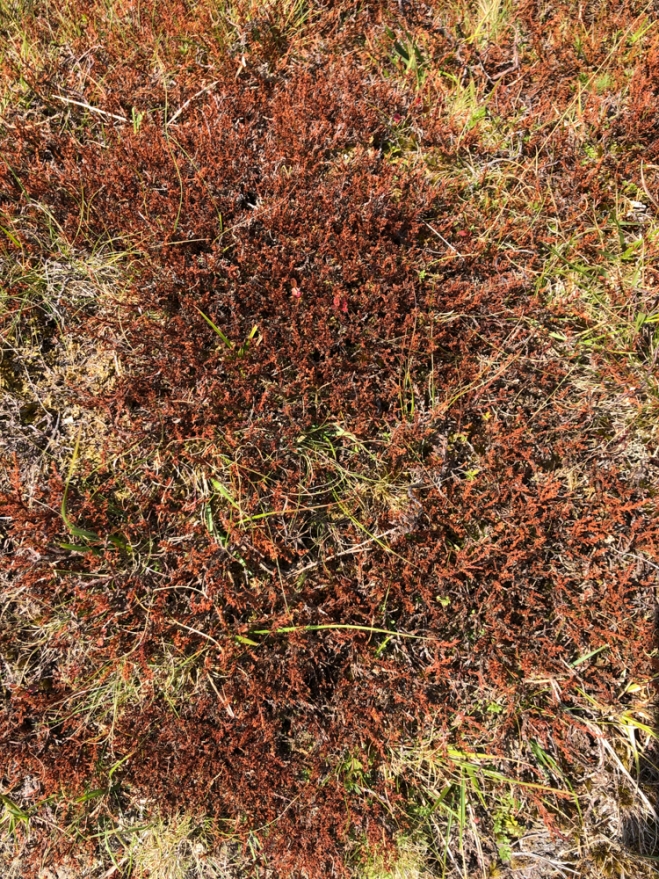 Heather Beetle damage. It is very characteristic and eye catching.

Last week I walked from Rowtor on Okehampton Common up the military road to Observation Post 15 and then down to Ockerton Court. All the way along the track there are signs of extensive damage to the heather plants – I would estimate that over 90% of plants are affected.

Work carried out in the north of England and in Scotland suggest that the larvae are active until the end of August when they drop down into the litter and pupate into adult beetles. Despite three separate searches on Okehampton Common, the Forest of Dartmoor and Headland Warren Common I only managed to find three larvae and one adult beetle.

Here is a Heather Beetle larvae on Okehampton Common eating the few remaining green leaves of the plant.

I suspect that the absence of larvae and adults during my searches in the first week of August means that the larvae have already dropped into the litter and are beginning to pupate – as a result larvae and adults are not visible. However the very extensive areas of damaged heather indicates that they have been very active in June and July.

It is possible for the heather to recover from this attack and I will be monitoring it to see if it does. However parts or all of the heather plant can be killed. When this happens the shoots turn from orange brown to grey.

In this image the areas of dead heather (darker brown bits) are being over run by Purple Moor Grass (Molinia caerulea) – the bright green shoots of this year’s growth and the light brown leaves from last year. Molinia is unable to replace heather whilst the heather is alive but can and does do so when it is dead.

Heather Beetle is a seriously under-recorded species on Dartmoor – the National Biodiversity Network database has just one record and the is from Fingle Woods and not from the high moor!

There is clearly a need to gather more records ….

There is anecdotal evidence nationally that Heather Beetle attacks are getting worse and it has been suggested (based on research from the Netherlands) that the severity and frequency of Heather Beetle outbreaks is linked to the levels of atmospheric pollution – particularly nitrogen levels.

Heather Beetles are a natural part of the moorland wildlife community and historically damage to heather was limited except in the ‘outbreak’ years. Last year when I was walking the Commons in July I also noticed extensive areas of affected heather – at this point in time heavy attacks appear to be frequent – maybe even annual.

There are implications for wildlife, conservation and hill-farming as a result of these serious Heather Beetle attacks.

Ironically it is thought that the severity and frequency of Heather Beetle attacks has increased because the nitrogen has made the young shoots and leaves more nutritious, it is also reported that sheep preferentially graze the new shoots too for the same reason.

There is a dearth of information on Heather Beetle issues on Dartmoor but from my own observations this year and last it is a potentially serious and widespread problem. However it would also appear that the problem is not universal across the moor. I searched for it in the heather stands around the Warren House Inn  and found Heather Beetle attacks to be minor – perhaps this level of damage is the natural level – whereas the levels seen on Okehampton Common, the north part of the Forest and on Headland Warren Common are the outbreak levels.

It seems to me that there is a clear need to better understand the Heather Beetle situation on Dartmoor, this would be in the interests of Natural England, the Dartmoor National Park Authority and the Dartmoor Commoners Council. The time to survey for the impacts of Heather Beetle is July and August. Maybe a bit of ‘Citizen Science’ could come to the rescue?

I would also be interested to hear from people who have found the characteristic orange brown stands of heather this year on Dartmoor.

I’ve written before about Heather Beetles and this link takes you to my blog which contains further information and some references you can download.

First longhorn beetle of the year for me 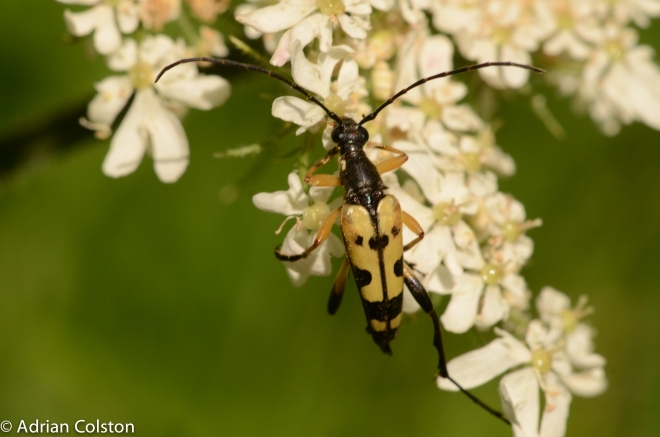 In the UK there are 47 species of ladybird!

Here are a couple from my garden yesterday. 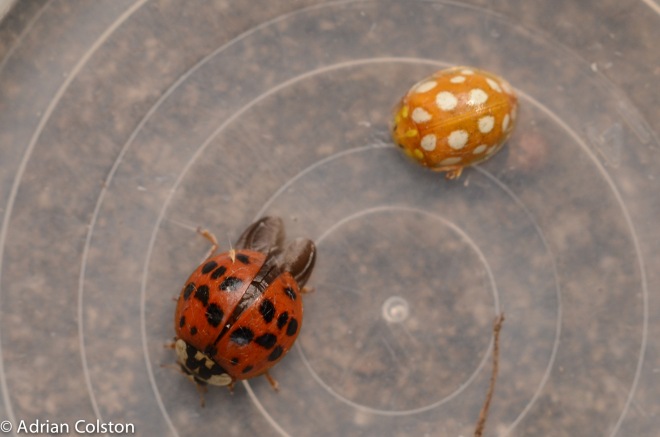 The Orange Ladybird is associated with oaks and ash.

All ladybirds are predators of insects such as aphids.

A couple of firsts for the year

The cockchafer or maybug

And the Small Phoenix – a smart moth!

When I was at the Bird Fair at Rutland Water a week or so ago I was delighted to find that the second volume of Andrew Duff’s epic series on the Beetles of Britain and Ireland had been published. When complete it will consist of four volumes covering all the species of British beetles.

The first volume (Volume 1) was published in 2012 and included beetle families such as ground beetles, diving beetles, hister beetles and carrion beetles. The series is privately published by Andrew Duff. 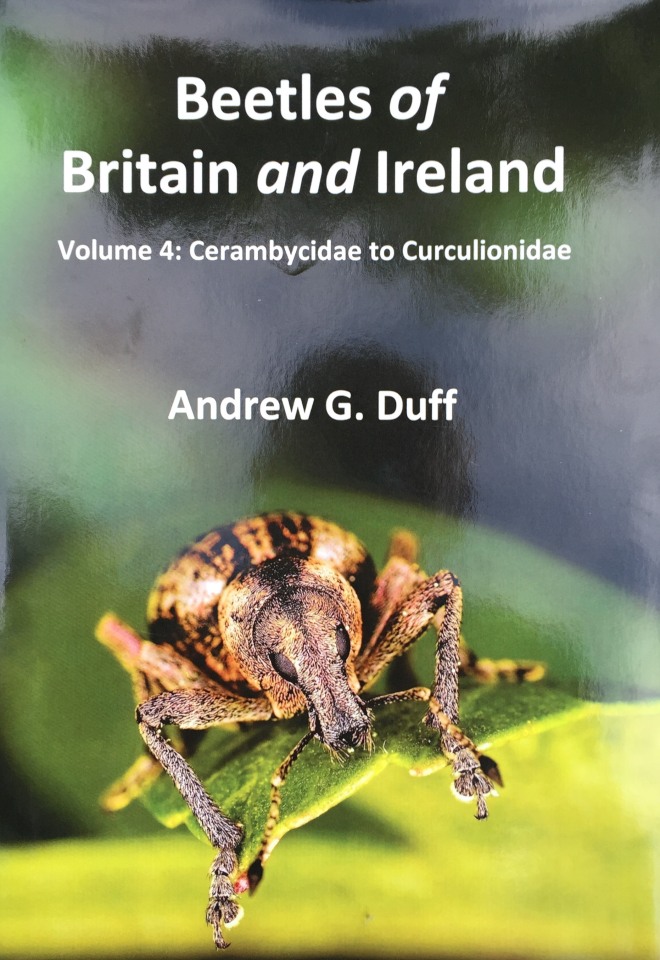 The second volume (which is actually volume 4) covers the longhorn beetles, leaf beetles and all the different types of weevil – the book is 623 pages long. 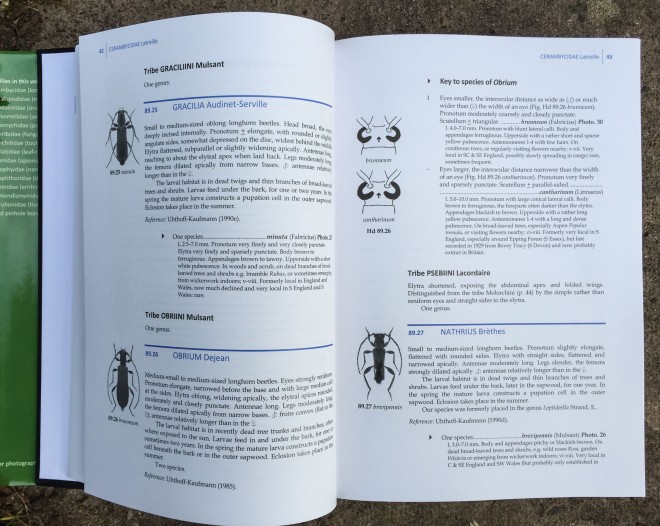 As you would expect the book contains keys to the sub-families and keys to enable you to determine the species of beetle you have found. Up to this point people interested in longhorn beetles have had to rely on earlier books such as Joy’s 1932 A Practical Handbook of British Beetles (reprinted in 1976),  various European books such as the bilingual German text by Ulrich Bense – Longhorn Beetles or the excellent 2 part paper in British Wildlife Magazine by Andrew Duff (British Wildlife Volume 18 pp406-414 and Volume 19 pp35-43 -2007). This new volume is now up to date with the current taxonomy and species status.

In addition to the text and numerous annotated sketches the book contains marvellous colour plates of museum specimens.

As mentioned above volume 4 also contains the leaf beetles and all the weevil families as well – a series of groups I am much less familiar with.

The text on the back of the book states “The book is intended as a reference source for coleopterists, ecological consultants and museum curatorial staff, as well as naturalists wishing to make their transition from a casual to a more serious interest in beetles. By bringing together reliable modern keys and using the latest taxonomic arrangement and nomenclature, it is hoped that beginning coleopterists will more quickly learn how to identify beetles and gain added confidence in their identification.”

This volume and the series to date is a magnum opus. Andrew Duff has produced a fantastic piece of work and we should be very grateful to him for his endeavours. Volume 4 is not cheap (£98) but for a 623 page book produced to such a high standard with a limited audience this is to be expected. I obtained my copy from Atropos – see here.

There was another burying beetle in my moth trap last night  – this time an orange and black one.

It has orange tips to its antennae and has two bands of orange markings – I think it is Nicrophorus vespillo but it might be N. interruptus