Since the Industrial Revolution humans have altered the natural biogeochemical cycles by increasing the availability of biologically reactive forms of natural elements such as nitrogen (Caporn & Emmett 2009).

In the UK, there are two distinct forms of nitrogen pollution – nitrogen oxides (NOx) and ammonia (NH3). Emissions from vehicles, power stations and factories are largely responsible for NOx, whilst emissions from agriculture (livestock manures and fertilisers) account for the majority of NH3.

However, despite the large falls in nitrogen emissions, the deposition of all nitrogen compounds has hardly fallen at all. This unexpected situation has arisen as the atmospheric chemistry over Britain has been altered leading to more rapid oxidisation of nitrogen. This rapidly oxidised nitrogen is deposited in the UK when previously it would have been exported to Continental Europe (RoTAP 2012).

As a result, many parts of the UK have been receiving high levels of nitrogen deposition for decades.

This map shows nitrogen deposition between 2011-2013

This map shows acidity
(Source: Centre for Ecology and Hydrology).

There is an extensive academic literature on the implications of atmospheric nitrogen pollution for semi-natural habitats. Bobbink et al (1998) in an Essay Review highlight the three main impacts:

Field et al (2014) found that whilst the diversity of mosses, lichens, forbs and graminoids decline, the cover of graminoids increases.

Kirkham (2001) conducted a study on 8 eight moorland sites including one on Dartmoor and found that the accumulation of nitrogen had changed a substantial proportion of the Heather (Calluna vulgaris) dominated uplands from nitrogen limited ecosystems into phosphorus limited ones. He suggested that this favoured Purple Moor Grass (Molinia caerulea) as it was a species that was better adapted to phosphorus limitation.

Bobbink et al (2010) also state that disturbance to the dwarf shrub canopy by either Heather Beetle (Lochmaea suturalis) attack, winter frost injury or drought are increased in likelihood by enhanced nitrogen deposition. Kirkham (2001) also found that nitrogen deposition led to increased concentrations of nitrogen in the growing shoots of Calluna and he cites an unpublished report by S.E Hartley which suggested that this made the Calluna plants more susceptible to increased grazing pressure by sheep. He then concluded that increased nitrogen content in the shoots of Calluna resulting from atmospheric pollution may therefore be playing a part in the deterioration of Calluna moorland caused by overgrazing.

The effects of nitrogen deposition are not related only to plant communities. Fox et al (2014) in a study of the long-term changes in British moth communities found that moth species associated with low nitrogen, based on their larval host plant characteristics, declined most strongly. In a study from Sweden Ockinger et al (2006) reported that butterfly species which relied on nutrient poor conditions tended to decrease whilst those reliant on nutrient rich conditions tended to increase. They suggested that this indicated a negative effect of increased nitrogen in the soil resulting from the active fertilizing of pastures and / or atmospheric nitrogen deposition.

In a study looking at the likely impacts of nitrogen deposition up to 2030 Stevens et al (2016) state that for heaths and bogs ‘we project overall reductions in species richness with decreased occurrence of tricolours lichens and some bryophytes, reduced cover of dwarf shrubs and a small increase in grasses’.

Addressing the question of how long do ecosystems take to recover from atmospheric nitrogen deposition Stevens (2016) concluded ‘There are a number of barriers to recovery such as continued critical load exceedance and lack of seed bank or local seed source, and there is potential for vegetation communities to reach an alternative stable state where species lost as a consequence of changes due to nitrogen deposition may not be able to recolonise.’

Whilst the conservation agencies and N.G.O.s were quick to respond to the threat posed by sulphur dioxide pollution and ‘acid rain’ in the 1970s and 1980s they have been much slower to respond to the threat posed by nitrogen pollution. English Nature published a report in 2004 (Bignall et al 2004) on the ecological effects of diffuse pollution from road traffic but that was as much a response to the requirement to provide planning authorities advise on new roads schemes – the report looked at localised impacts rather than diffuse ones.

In 2011, the Joint Nature Conservation Committee published a series of reports it had commissioned on the evidence of nitrogen deposition impacts on vegetation (Stevens et al 2011, Emmett et al 2011 and JNCC 2011). This work provided a new analysis of eight national scale datasets which showed significant responses in cover and presence of 91 plant and lichen species in relation to nitrogen deposition. The summary report concluded that ‘nitrogen deposition is compromising our ability to deliver current conservation commitments such as the objective to achieve Favourable Condition Status under the Habitats Directive.’ This report also contained various recommendations for the country agencies.

Natural England (2015) published a document entitled ‘Atmospheric nitrogen theme plan – developing a strategic approach for England’s Natura 2000 sites. The plan reported that in England 80% of sensitive Special Areas of Conservation (SAC) and 70% of sensitive Special Protection Areas (SPA) are estimated to exceed the critical load for one or more of their protected features. 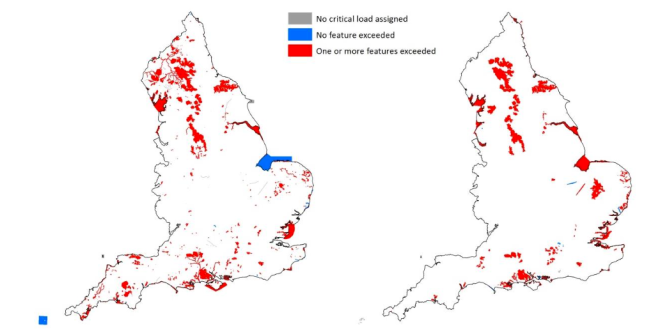 As can be seen from the left hand map both of Dartmoor’s moorland SACs exceed the critical load levels.

The document also contains a table setting out the threats from nitrogen for each of England’s SACs. The Dartmoor relevant section is set out in the following table.

The theme plan then proposes a trial of ‘Site Nitrogen Action Plans’ (SNAP) which would document:

At this point it is not clear what progress has been made on the trial SNAPs. However Natural England’s published Site Improvement Plan (SIP) for Dartmoor [1] has listed ‘Air pollution: impact of nitrogen deposition’ as its third priority area (behind ‘Hydrological Changes’ and ‘Wildfire / Arson’) although at this point no budget has been allocated and no ‘delivery partners’ have been identified.

Unfortunately raising the profile of the issue is likely to prove easier than solving the problem – the measure suggested in the Dartmoor SIP is ‘control, reduce and ameliorate atmospheric nitrogen impacts’, which as this review shows will be easier said than done.

JNCC (2011) Evidence of nitrogen deposition impacts on vegetation: implications for country strategies and UK biodiversity commitments. This is a summary of JNCC reports 447 & 449. http://jncc.defra.gov.uk/pdf/Project%20summary%20v4_final.pdf

Plantlife (2017) We need to talk about nitrogen. The impact of atmospheric nitrogen deposition on the UK’s wild flora and fungi. http://www.plantlife.org.uk/application/files/3514/8935/6858/We_need_to_talk_about_Nitrogen_FINAL_webpdf.pdf