Defra have just published their results from the Farm Business Survey 2015-16 – see here. As I have worked on upland issues on Dartmoor for over a decade I have in the past tended to focus on the figures that relate to upland farming. This time though I have looked at the entire farming sector. The figures are entirely astonishing.

This graph shows the situation across the sector in 2014-15 and compares it with 2015-16. For those not familiar with Defra statistics I will try and explain what this data shows. Farm Business Income is the key figure – it might also be described as farm profit before the farm’s family labour input is included. So for cereal farms the Farm Business Income fell from £45,000 to £35,500. The bar chart also tells us how that income was made up. The dark blue bit at the bottom is the income from the agricultural activity. For cereal farms this is negative. So the average cereal farm in 2014-15 made an agricultural loss of approaching £10k and by 2015-16 this had worsened to approaching £20k.

In addition the average cereal farm in England received £7200 from agri-environment schemes, £34,300 from the Basic Payment Scheme and over £14,000 from diversification out of agriculture. If you remove the Common Agricultural Policy subsidy money out of the calculations (the £7200 and the £34,300 = £41,500) the average cereal farm in England makes a Farm Corporate Income loss of -£27,200.

You can work through all the other types of arable farming from the graph in a similar way – in 2015-16 ‘General Cropping’ broke even on its agricultural activities, whilst ‘Mixed cropping’ made a loss of approaching £20k. Only ‘Horticulture’ made an agricultural profit and is much less reliant on subsidies.

This is the data for livestock farming in England.

In all sectors, except LFA (Less Favoured Areas) grazing livestock i.e. upland grazing e.g. Dartmoor, the Farm Business Income has dropped year on year. The Defra report notes that the LFA figure has risen because the subsidy payments in the uplands has been increased. Only the poultry sector in 2015-16 was profitable if you removed the subsidy payments.

If you remove the subsidy payments from these figures and take account of the farm’s labour input only horticulture and poultry are financially viable and I used to think that the uplands were a special case.

These figures are of course averages across the country and there is much variability between Regions and the size of farms – if you want to delve into the detail you can download the Defra Excel spreadsheet here.

I find these figures astonishing and entirely shocking on many different levels. Despite  £3+ billion of public subsidy English agriculture was unable to make a profit in 2015-16 and a large number of farmers failed to produce a fair return for the labour of the family farm.

And that neatly brings us to Brexit, the Government has promised to maintain the current subsidy scheme until 2020 whilst they work out what will follow the EU subsidy model. These figures show that without subsidy agriculture generally in England (not just the uplands) will find it difficult to be viable. Additionally without access to foreign markets for exports on similar terms to the ones currently offered by the Single Market the profitability of English agriculture will reduce further. That might be to be resolved as early as March 2019.

All of this complexity largely falls to Defra for resolution. Yesterday the Institute for Government published a report entitled ‘Whitehall’s preparation for the UK’s exit from the EU’ which you can download here. 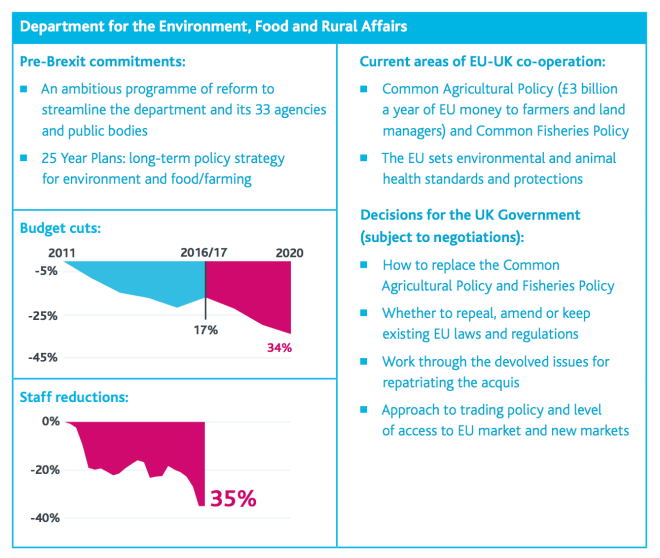 This graphic summaries what the Insitute for Government believes will be required of Defra.

Their report concludes ‘Whitehall has the skills but not the capacity to deliver’.

I can’t bring myself to write the final paragraph – I’ll leave that to you.

5 thoughts on “The state of English agriculture”