Figures just release by Defra (see here) show that the area of land in England used to grow maize for use in Anaerobic Digestion plants to produce electricity rose to 52,280 ha – a 55% increase on 2105.

29% of all maize grown in England now is for AD plants. This accounts for 1% of all arable land in England. 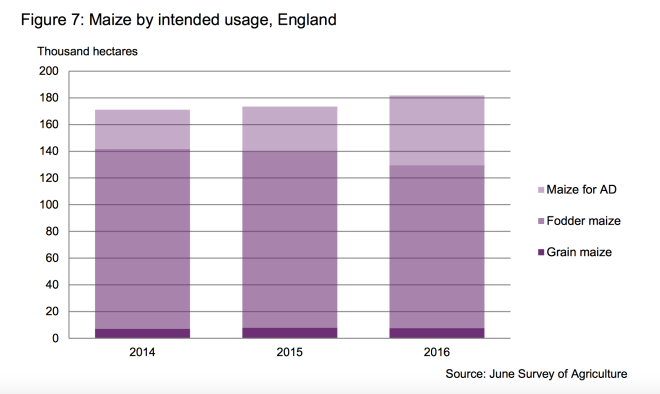 As I, and many others, have repeatedly said maize can be implicated with increased flood risk (see here and  here for my collection of blogs on the topic).  Maize is harvested late in the year and the heavily compacted soils are left bare all winter. During periods of high rainfall these soils do not absorb the water to any great extent – instead the water rushes off the fields, particularly when they are on slopes and quickly overwhelms stream and river systems. When this happens extensive soil erosion can also occur.

Prior to its abolition earlier this summer, following Theresa May’s appointment as Prime Minister, the Department for Energy and Climate Change had issued a consultation paper which included two options to reduce the incentives for farmers to grow maize for AD – see here.

I haven’t heard the outcome of that consultation and I’m not sure which government Department is now responsible for it – Defra maybe? Does anyone else know?

The 55% increase in maize grown for AD announced today would not have been influenced by the DECC consultation as the seeds would have been already sown. It would however be helpful if an announcement is made soon as it would potentially influence sowing intentions next spring and I don’t think anyone (other than the maize farmers concerned) want to see a further increase in the area of maize grown in England with its attendant increased flood risk and heightened soil erosion potential.