The Visitor Centre in St David’s in Pembrokeshire had a small display about an aurochs horn that was found on the exposed beach of Whitesands Bay during the winter storms of 2014. Aurochs are now globally extinct but formerly they were the wild ox of Europe. See here for the BBC report of the find.

The aurochs horn of Whitesands Bay

The skeleton of an aurochs from a Danish Museum

Aurochs were large aggressive cattle and were hunted by Neolithic and Bronze Age people. By the end of the Bronze Age they were very rare and it is thought that they went extinct in Britain during Roman times. Julius Caesar saw aurochs in France and wrote about them in De Bello Gallico. “These are a little below the elephant in size, and of the appearance, colour, and shape of a bull. Their strength and speed are extraordinary; they spare neither man nor wild beast which they have espied.

The last auroch went extinct in 1627 in Poland. For more on aurochs – see here.

Attempts have been made to ‘re-create’ auroch via selective breeding. During World War 2 the Nazis began a breeding programme to produce auroch so that they could be hunted. The programme was led by the Heck brothers and they produced the Heck Cattle which survive today and are used in a number of re-wilding projects across Europe. 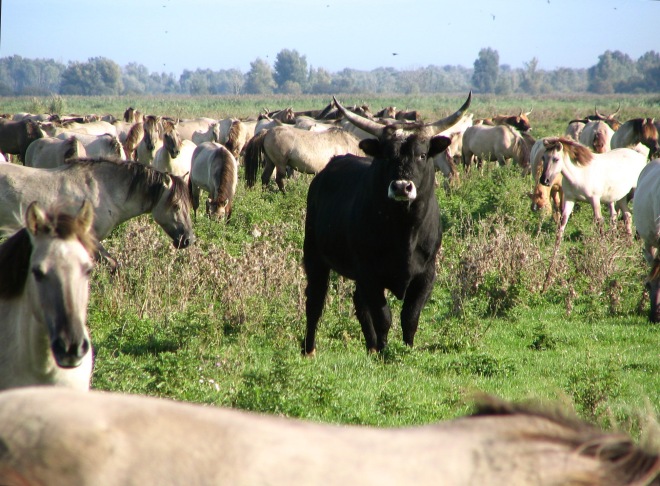 The Heck Cattle project was not that soundly conceived as the animals used for the back breeding were not well chosen. A new attempt is now being made to re-create the aurochs – it is called the Tauros Programme – see more details here.

The herd of Chillingham Wild Cattle in Northumberland are said to be a very close descendent of the aurochs – see here and here for more details.

7 thoughts on “The aurochs of Whitesands Bay”