Yesterday I went to the launch of the new Devon Bird Atlas at Stover Country Park near Newton Abbott. The new Atlas has involved over 1200 people over a 7 year period and has amassed over 1.2 million records. The Atlas includes both summer i.e. breeding records of birds and wintering records as well. The Atlas has also been able to compare the results with the data collected and published in the 1988 Devon Bird Atlas compiled by Humphrey Sitters. The book has been published by Devon Birds. 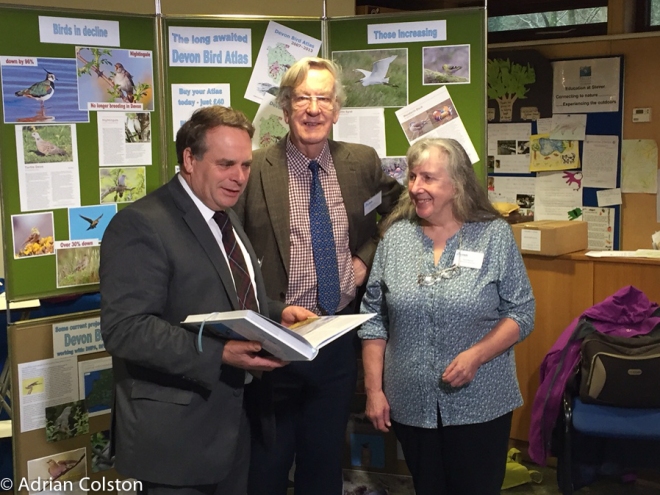 MP Neil Parish (left) was invited to the launch and is photographed here with Mike Lock and Stella Beavan the book’s editors.

The cover of the Atlas features the dipper

The new book highlights a number of changes in the county’s bird life since the 1988 book. 34 species have increased in their distribution, 52 have remained the same but 60 have significantly declined.

For example the lapwing is now only found as a breeding species in two sites in the whole of Devon – previously that figures was in the hundreds. Skylarks were previously found in 93% of the county’s tetrads (2km x 2km square) now it only occurs in 63%. Cuckoos have virtually disappeared from the Devon and are now only found on Dartmoor (78.9% of tetrads in the 1988 book 20% in the new Atlas). Meadow pipits – the cuckoo’s preferred host bird has declined from 44% of tetrads to 24.6%.

The write up for the Little Egret – one of the species which has arrived and colonised the county since the last Atlas was published.  Each species gets a detailed account in the new Atlas which features distribution maps for the 2007-13 survey along with a map from the 1977-85 survey. For some species there are also abundance maps and wintering distribution as well.

Here are the pages for the cuckoo – one of the real losers – the bottom left map shows the distribution of cuckoos between 1977 -85 whilst the top main map shows it for the period 2007-13 – an amazing decline over a 22 year period.

The new Atlas is a must for all interested in  wildlife and conservation in Devon. The book features a large number of brilliant photographs and of course contains a huge wealth of factual information. It is now on sale for £40 which considering it is over 500 pages and is illustrated in colour throughout is a bargain. I suspect it will be available in all good bookshops in Devon or failing that you can order it from Devon Birds here but you will have to pay the postage.

When I am not reading it, the new Atlas will be able to join my other books on Devon’s birds.

A big well done to all the team involved – rest assured that all of us involved with conserving wildlife in Devon will make good use of this book and will try to improve things for the future.