I know I have been writing a lot recently about flooding, maize and brown flood water but when you keep waking up to the little stream beside your garden thundering with brown flood water you take quite an interest in it. 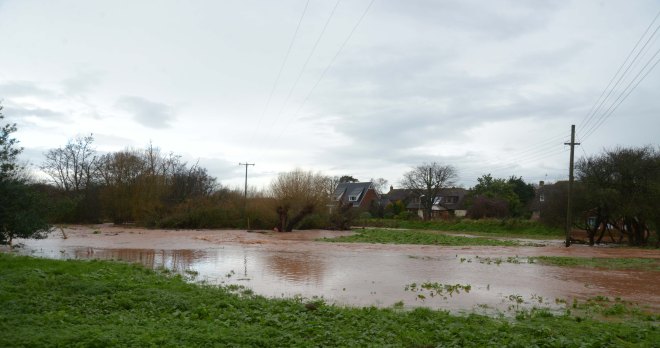 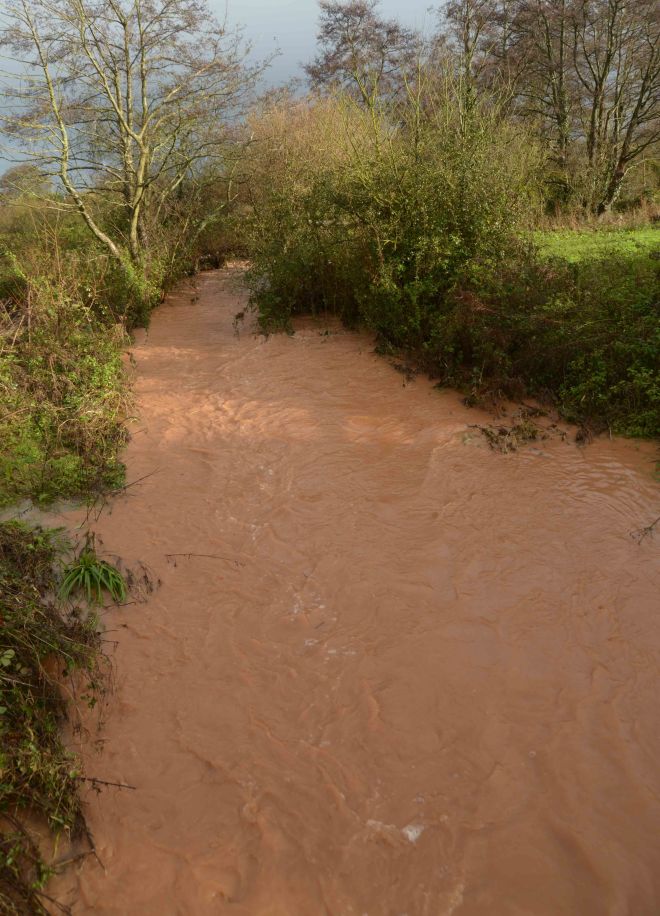 I was even visited by a couple who live in Station Road in Exton who had read my previous blog on the flooding in the village. They were asking me about the maize connection. As a result I have been looking more deeply into what has been published on the topic.

For me, the key piece of research was undertaken by RC Palmer and RP Smith which was published in the journal Soil Use and Management in 2013  and was titled Soil structural degradation in SW England and its impact on surface-water runoff generation. You can download and read the paper here.  The summary of the paper states:-

“Field investigations between 2002 and 2011 identified soil structural degradation to be widespread in SW England with 38% of the 3243 surveyed sites having sufficiently degraded soil structure to produce observable features of enhanced surface-water runoff within the landscape. Soil under arable crops often had high or severe levels of structural degradation. Late-harvested crops such as maize had the most damaged soil where 75% of sites were found to have degraded structure generating enhanced surface-water runoff.”

“Remedial actions to improve soil structure are either not being undertaken or are being unsuccessfully used.”

When this paper was first published George Monbiot wrote a piece in the Guardian – see here, where he suggested that government policy was partly responsible for the flooding of people’s homes by supporting and encouraging unsustainable farming practices including the growing of maize in unsuitable places.

Dr. Andrew Clark, Head of Policy Services at the NFU, responded furiously – see here, stating that farmers took their responsibilities seriously and if they didn’t you would not be eligible for their farm subsidies. He also concluded by stating

“The Journal of Soil Use and Management actually considers the impact that cropping and soil management can have on surface water flows at a field scale. It does not consider the impact of cropping and soil management on flooding. The lessons we should learn from this winter’s floods is all areas, both urban and rural, should be acting across entire catchments to find solutions.”

He seems to be suggesting here that the role of maize in flooding was therefore unproven. I would suggest that Dr. Clark hadn’t read the paper. The paper includes the following

“Archer et al.  demonstrate a link between land use and floods at catchment scale. They show from studies in the Axe catchment in Devon that rates of change in discharge volume respond to land use change at both the small and large catchment levels. The clearest evidence for this relationship was for moderate floods resulting from rainfall events of 10–30 mm/day.”

Robert Palmer one of the authors of the paper was pretty cross with the NFU comments and had the following published in the Guardian –  Maize farmers must take some of the flood blame – see here. I quote the majority of his reply below.

“The National Farmers’ Union doesn’t appear to grasp the seriousness of soil structural damage (compaction or squeezing the life out of soil) and its implications for water movement in the environment.”

“In my extensive field study of 3,243 sites, 75% of land under maize showed serious structural degradation (smeared, rutted and severely compacted) and was producing enhanced surface runoff across the fields. This is inevitable when crops are harvested late in the year (October and November) by heavy machinery.”

“Some 30% (93 sites) of this degraded maize land carried well-drained, naturally permeable soils over aquifer rocks. Historically, rainfall on these soils readily percolates vertically down through the soil and recharges groundwater resources. After maize cultivation, the damage to soil structure is so severe that rainfall cannot penetrate the damaged upper soil layers, and lateral surface runoff results.”

“A typical winter atmospheric depression (now referred to in the media as a storm) will produce 20-30mm of rain over a 12-hour period. Optimistically, assuming that up to one half of this rain percolates into these damaged maize soils, this leaves the volume of half an Olympic-sized swimming pool (in excess of 1m litres of muddy water) to be shed laterally across the surface of this “sealed” land for every 10-hectare block of maize stubble. So this winter, when the Meteorological Office reports 30 “storms”, every 10-hectare block of damaged land under maize stubble has produced the equivalent of 15 Olympic pools (more than 375m litres) as enhanced runoff. And 196,000 hectares of maize were grown in 2013, an increase of 24% on 2012. How can the NFU fail to understand the implications of this land use for catchment flooding?”

These are strong words from a scientist and what he is saying is pretty unambiguous.

So how does this relate to the catchment of the Exton Brook? Unfortunately I don’t know how many hectares of maize is grown in the catchment but it is plain for all to see that a considerable amount is. I have had a look at the soil map for the area to see if that offers any insights. Soil maps for all of England are freely available here. 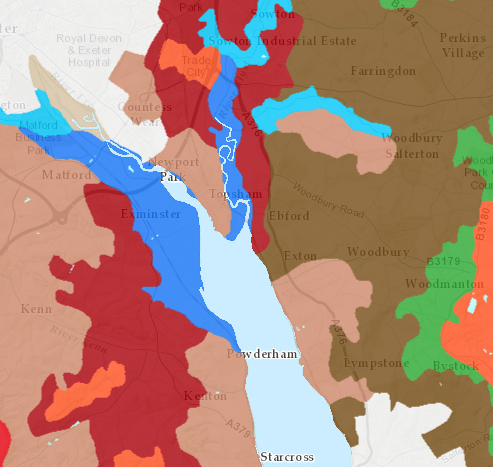 This is a screenshot of the soil types around Exton – the predominant soil type from the catchment is ‘Slightly acid loamy and clayey soils with impeded drainage‘ and is the darker brown colour on the map.

The description for this soil type can be viewed here. Interestingly and tellingly it states the following:-

The growing of maize and its associated autumn harvesting on these soils is exploiting the soil’s core vulnerabilities and is leading to the rapid muddy flooding.

Unfortunately the recent construction of two anaerobic digester plants (AD plants) nearby to the east of Exeter has encouraged local farmers including those in the Exton brook catchment  to supply maize to these power stations. The maize grown in the catchment is one of the key materials used to generate biogas (methane and carbon dioxide) which then powers the combined heat and power plant – see here for more details of anaerobic digesters.

The government (via DEFRA and DECC) have produced an Anaerobic Digestion Strategy and Action Plan – A commitment to increasing energy from waste through Anaerobic Digestion – see here. However this strategy has led to the increased growing of maize simply to fuel the power stations. Maize however grown on farmland where food could be grown can hardly be viewed as energy from ‘waste’.

DEFRA have also produced a soil strategy: Safeguarding our Soils – A strategy for England – see here. It states this as its vision “By 2030, all England’s soils will be managed sustainably and degradation threats tackled successfully. This will improve the quality of England’s soils and safeguard their ability to provide essential services for future generations.”

So we have two strategies from the same department working in opposition to each other.

So what can be done to improve the situation – that is, reduce flooding risk and improve soil conservation?

The Palmer and Smith paper does include some recommendations and some signs of hope.

“The Environment Agency has a programme of catchment studies to identify runoff problems and is working with partners, farmers and their advisers to deal with these problems. In East Devon, the Environment Agency funded a project where a subsoiler was purchased and made available to a local contractor who provided a subsidized service to farmers to deal with soil compaction identified by soil surveys. Sites were revisited after treatment and about 50% of these were found to be improved.”

“Farmers are becoming aware of the linkage between soil structural degradation and runoff generation, and it is in their own interests to improve soil condition where they can. The Maize Growers Association has led a successful campaign in partnership with the Environment Agency to improve the management of soil under maize. New early maturing maize varieties are being widely adopted, and frequently now maize stubble is being rough cultivated in autumn to remove topsoil compaction and surface damage.”

There is little evidence that the recommendations above are being followed in the Exton brook catchment – perhaps because many of the maize farmers are new to it as a result of the new AD plants.

“It is simply not true to claim that farmers need do nothing to protect their soil and still be eligible for CAP payments. Every farmer receiving payment must complete an annual soil protection review. This requires farmers to identify problems – such as erosion and compaction – and set out actions on how to address them.”

Unfortunately the protection that maize farmers need to apply to receive their CAP payments simply involves leaving the maize stubble in the fields over winter – the so called ‘minimum soil cover’ clause – see here for more details. And that clearly isn’t working and is urgent need of review.

Finally DEFRA should ensure that AD plants use waste and not specifically grown crops.