The high brown fritillary is probably the most endangered species of wildlife on Dartmoor – indeed the UK. It has undergone massive declines over the past decades and now only hangs on in a few locations – Dartmoor and Exmoor are its strongholds. Hembury Woods and its  environs are where the species is now doing its best. Hard work from our warden John Wales and cutting edge research from Professor Jeremy Thomas and Dave Simcox have ensured that the Hembury population is vibrant, strong and is bucking the national trend of decline.

High brown fritillaries are very, very difficult to identify – they are extremely similar in appearance and behaviour to dark green fritillaries – in additional they fly extraordinarily fast and only stop very infrequently. They can also be mistaken for silver washed fritillaries – another large grit species also on the wing in July.

Over the past three weeks I have spent hours and hours trying to see a high brown fritillary – they have dominated many of my weekends and evenings! Until today all this effort had been without success. Finally today – just as I was beginning to truly despair –  I managed to see and photograph a high brown frit.

During my previous visits I have seen dozens and dozens of fritillaries many of which were no doubt high browns but they just shot past and never settled. Those that did settle were invariably dark greens. That is until today! Finally I managed to photograph one. Be prepared – the following photos are what we – in the trade- call ‘record’ photos – they are not publication quality images but they do show the salient ID features. 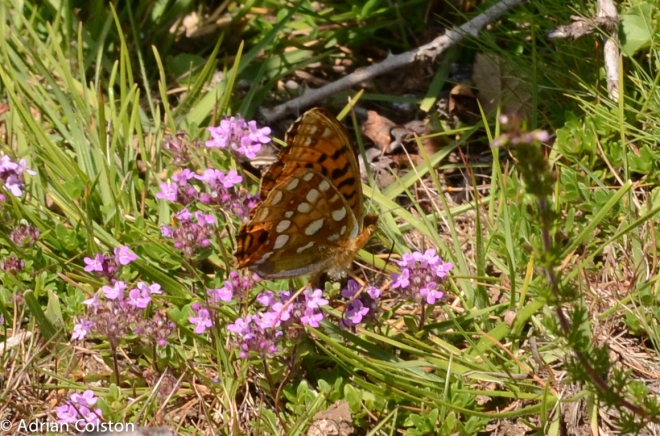 There are three rows of obvious white blobs – in between the two to the left of the hind wing are a string of red circles (three of which have white/silver dots) – this is the feature which characterises the high brown fritillary. 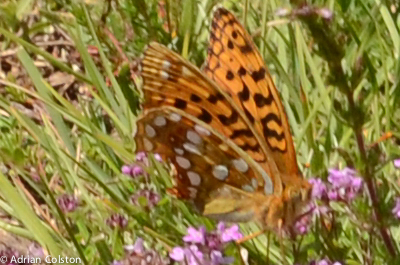 A very enlarged close up – thus the quality – of the fore wing (the wing on the right) – there are two black blobs at the top with a much smaller dot underneath which is indented – i.e. not in line with the blobs – another characteristic feature of high browns. 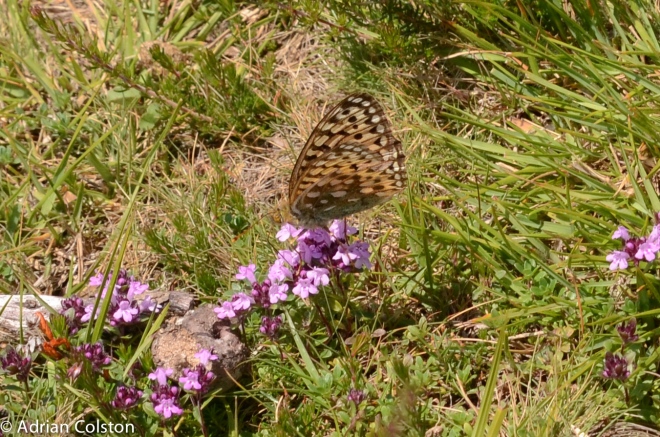 I also saw a number of dark green fritillaries – here is a female – blobs not indented and no red circles with silver dots – see my earlier blog on dark greens for better photos and explanations – see here.

To cap the day – silver washed fritillaries are now also on the wing – they emerge in early to mid July.

Here is the underwing of a silver washed fritillary – note the long silver line on the under wing – diagnostic.

And here is a male silver washed – the ‘brand’ marks on the upper forewings are the tell tail sign to identification.

Well what a day! I finally managed to see and identify a high brown fritillary and also see the other two species of large frits.  Then to cap it all I managed to get a few half decent photos of all three species.

With natural history and wildlife – patience and persistence is everything – that’s my top tip ….. for life!